Wheat: Another Victory For Vladimir

The rising inflationary pressures caused by the tidal wave of central bank liquidity and tsunami of government stimulus together with pandemic-inspired issues in the supply chain ignited a bull market in the commodities asset class. The first market to reach a new all-time high was , which rose to $2,063 in August 2020. Gold had already been rising before the pandemic gripped markets, rising to new record levels in many currencies in 2019. Gold handed the bullish torch to other raw material markets after the price ran out of upside steam and corrected.

In May 2021, it was , , and that reached record peaks. Many other commodities, including coal, , , grain and oilseeds, , , , and others, have reached multi-year highs over the past year. In October, the energy commodities continued to make higher highs. In early November, cotton and futures rose to new multi-year peaks.

When considering which commodity has the most political impact on the world, most market participants would likely cite the market. After all, more than half the world’s reserves are in the Middle East, the world’s most turbulent political region. Crude oil continues to power the world. I would disagree.

Throughout history, wheat shortages and rising prices have caused the most political consequences, toppling governments as the primary ingredient in bread is an essential nutritional source worldwide. The Teucrium Wheat (NYSE:) tracks the price of CBOT wheat futures, the benchmark for world wheat prices. Russia is the world’s leading wheat exporting country.

The US is the leading corn and soybean producer

The United States leads the world in and production and is the most influential exporter of the coarse grain and oilseed.

On Tuesday, Nov. 9, the USDA released its latest World Agricultural Supply and Demand Estimates report. Many producers and consumers view the monthly WASDE report as the gold standard for supply and demand data. The November WASDE turned out to be more bullish than bearish for corn and soybean prices as they rallied in the aftermath of its release. 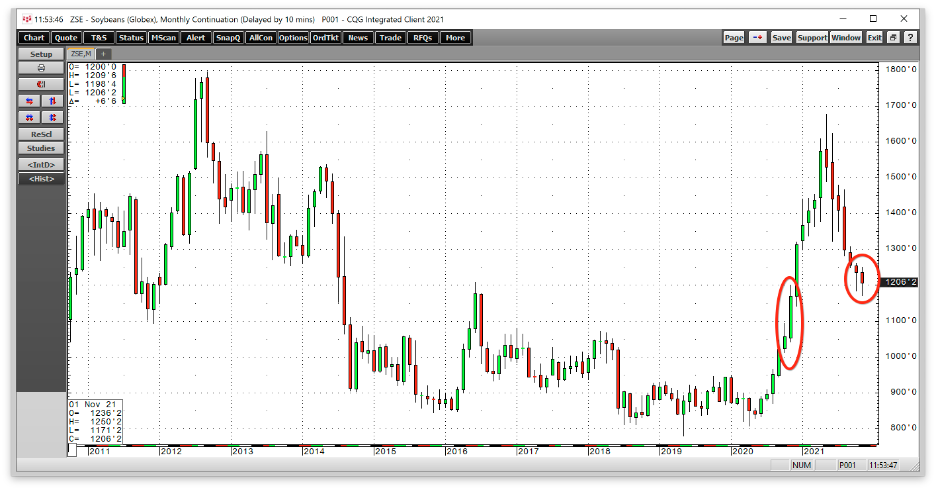 The monthly chart shows that nearby soybean futures reached a high of $12.00 per bushel in November 2020. The oilseed futures were sitting at just slightly above that price on Nov. 10, 2021. Meanwhile, prices recovered from a low of $11.7125 in the aftermath of the November 2021 WASDE report.

Wheat is another story

While the US dominates the corn and soybean futures markets, wheat production comes from producers worldwide. The US is a significant exporter of the primary ingredient in bread and cereals, but Russia is the leading exporter of the grain.

The latest WASDE report did not cause any bullish fireworks in the wheat futures arena. The bullish price action occurred in early November when the price rose to its highest level since December 2012. CBOT soft red winter wheat futures are the most liquid wheat contract and benchmark for world prices. 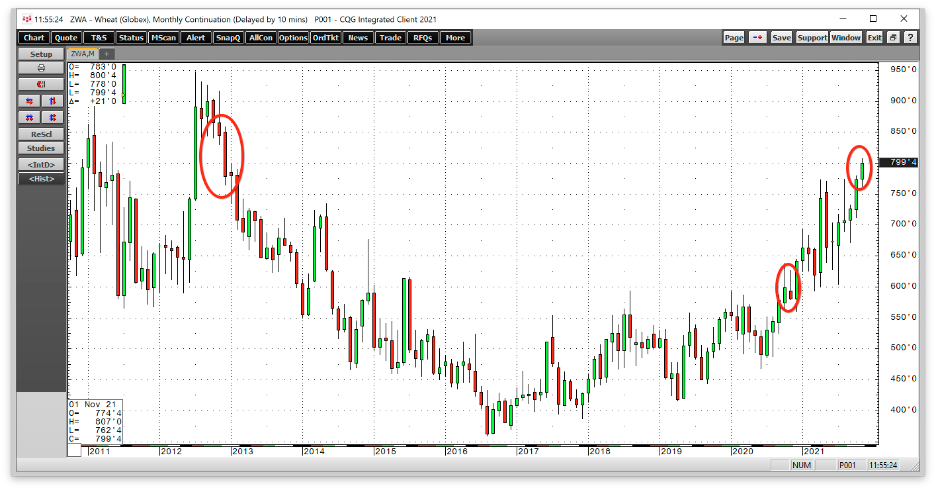 Wheat is the world’s most political commodity

Most market participants believe that crude oil is the world’s most political commodity for a good reason. The Middle East can be a hornet’s nest of political turmoil. However, wheat is the commodity that feeds the world. Shortages and rising wheat prices have unseated more than a few governments over history.

The French Revolution began as a bread protest and ended with a trip to the guillotine for Marie Antoinette, the last queen of France. In the early 2010s, the Arab Spring began as a series of bread riots in Tunisia and Egypt, leading to a wave of government changes in North Africa and the Middle East. If governments cannot feed their people, they tend to lose power. 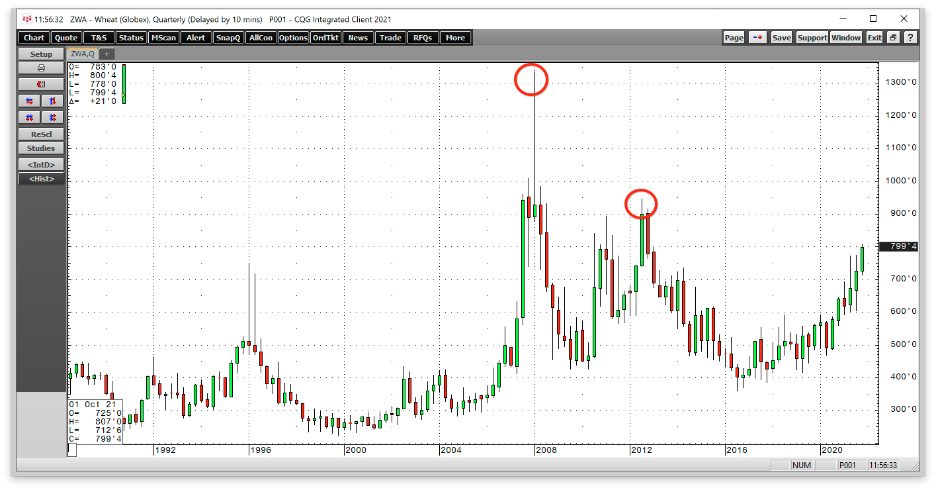 The rising wheat and bread prices and shortages set the stage for political change. The quarterly chart shows the rise in CBOT wheat prices to an all-time high of $13.3450 in 2008 and $9.4725 per bushel in 2012. With wheat probing over the $8 per bushel level, more political turmoil could be on the horizon in 2022 and beyond if wheat prices continue on a bullish path.

CBOT wheat futures probed over the $8 level for the first time in almost nine years earlier this month. Wheat is not alone, as many other raw material prices have reached multi-year or all-time peaks since finding bottoms in early 2020 as the global pandemic drove prices initially lower.

The first commodity to rise to a new record peak was gold, the ultimate inflation barometer. Gold reached $2,063 per ounce in August 2020 before correcting. probed over $30 per ounce in February 2021, the highest price since early 2013. In May 2021, copper, lumber, and palladium reached new record peaks. Over the past months, grain, oilseed, energy, soft commodity, and animal protein prices moved to multi-year highs.

Bull markets rarely move in straight lines, and many experienced corrections after reaching their recent peaks. However, in what has been nothing short of a bullish relay race in the commodities asset class, one commodity has passed the bullish torch to another. The most recent recipients of the bullish baton have been the cotton and wheat futures markets, rising to new highs in November.

Commodities are not the only asset class where prices are appreciating. Stocks, real estate, and cryptocurrencies have all moved to record levels over the past days, weeks, and months. The central bank liquidity and government stimulus have flooded the financial system causing inflation to rise. Accommodative monetary and fiscal policies addressing the pandemic are the root causes of the inflationary pressures.

Crude oil and wheat are the two most political commodities. Ironically, Russia is a powerhouse in the grain and energy commodity. Vladimir Putin’s Russia is filling its coffers with the spoils of rising oil and grain prices. He had increased his country’s position in both over the past decade.

In wheat, President Putin invested in production and logistics around the Black Sea region. In crude oil, he cooperated and guided OPEC, the international oil cartel, becoming the most influential nonmember, and causing the market to now refer to the cartel as OPEC+, the plus standing for Putin. Russia is the prime beneficiary of rising oil and wheat prices, and the trend in both markets remains higher as of Nov. 10.

Market dominance positions Russia with the power to extract higher prices from worldwide consumers strategically. Rising US and robust demand from China and other nations put Russia in the driver’s seat with the ability to push oil and wheat prices higher over the coming months and years. Given the political nature of the energy commodity and grain, control of the markets puts the Russians in a position to increase their sphere of influence if political changes occur.

The most direct route for a risk position in worldwide wheat is via the futures and futures options traded on the CME’s CBOT division. The Teucrium Wheat ETF product provides an alternative for market participants looking to participate in a rising wheat price without venturing into the futures arena. 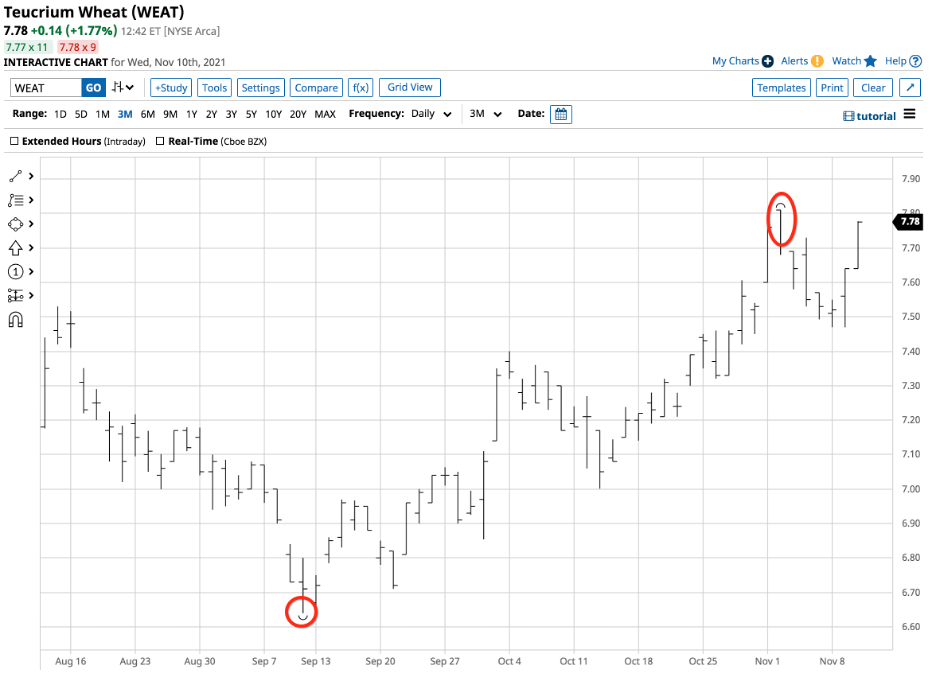 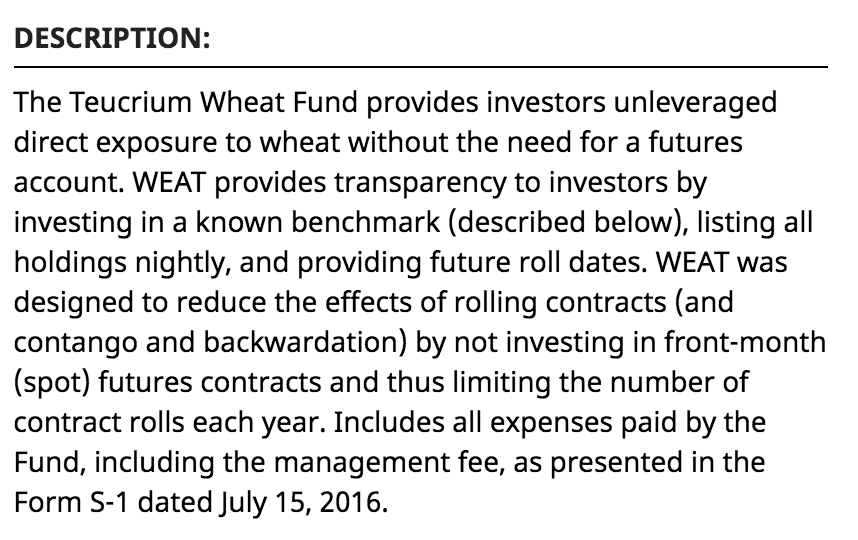 The fund summary describes the structure of the WEAT ETF product.

Wheat has made higher lows and higher highs since the turn of this century. In 1999, the nearby CBOT wheat futures traded at a low of $2.2250 per bushel. Rising global population, inflation, and Russian control of the wheat market are bullish factors for the primary ingredient in bread. The higher the wheat price increases, the more susceptible it becomes to a correction. However, fundamental and technical elements support a continuation of higher lows and higher highs in the wheat market, benefiting Russia and causing more than a few concerns from worldwide leaders who need to feed their citizens to maintain power and control.

Chart Of The Day: Sunpower Stock Primed For A Surge