Week Ahead: Equity Gains To Resume On Blowout Earnings; Dollar To Head Higher

Forecasts for earnings growth during the current reporting season have almost doubled, to 46% from 24% predicted at the start of April. Of the companies reporting, 87% have beaten earnings expectations on an EPS basis, putting the current quarter on course for the most beats on record, at least since Refinitiv—the source for the above statistics—began tracking the data since 1994.

As such, equity markets appear positioned to move higher in the week ahead.

On Friday, however, most US stocks on the , , and retreated from all-time highs after economic data signaled inflation was on the rise. Compounding market worries, Dallas Fed President Robert Kaplan said it was time to begin “the conversation about reducing central bank support for the economy.”

In Kaplan’s view, expressed during virtual remarks on Friday, there are clear signs of excess risk-taking occurring in the market. He sees that as the cue for the Federal Reserve to begin considering tapering its $120 billion monthly bond buying. Kaplan, “reiterated his expectation that the Fed will need to start raising interest rates next year, more than a year earlier than most of his Fed colleagues anticipate.”

The S&P 500 pared its biggest monthly gain since November, after US , in March, enjoyed the largest monthly increase on record thanks to stimulus checks. Data for this measure has been compiled since 1946.

It’s important to remember that these extraordinary economic results look remarkable only because they are being compared to a year ago when the economy was at a standstill due to the rapidly spreading coronavirus pandemic. We made a similar point at that time as well, noting the inconceivable data produced after the March 2020 bottom. We were dismissive, as well, about the market’s rapid climb after the event.

We’ll admit, however, that we were wrong. What followed were the best returns in decades.

Will the same thing happen now?

We can’t, of course, know. Credit Suisse’s Jonathan Golub increased his target for the SPX from 4,300 to 4,600, as earnings are too good to ignore. On the other hand, Aberdeen Standard Investment’s head of North American equities, Ralph Basset, thinks the optimism is largely priced-in and high valuations are maxing out. Finally, JPMorgan Chase has advised traders to prepare for a reflation comeback as the economic reopening accelerates.

Still, on Friday, the reflation trade took a step back.  dropped 2.5%, underperforming all other sectors. Another laggard as the trading week came to a close—the Russell 2000, which has represented value stocks due to the small cap domestic business listed on the index that have suffered during lockdown.

Yields, including for the Treasury benchmark, rose for the week, snapping a three week decline.

But rates fell on Friday, dropping from the extended neckline of the top, showing resistance for the third straight day, as the price fell below the 50 DMA.

The surged, rising 0.8%, the most for the global reserve currency in more than two months, since Feb. 26.

While yields fell, the dollar jumped for a second day, for the first time since Mar. 30, as traders covered shorts after Fed Kaplan’s call for a discussion on slowing purchasing to reduce liquidity. In addition, the US economic rebound is outpacing that of other countries, which is sure to attract foreign investment—likely boosting the greenback going forward. Finally, traders rebalanced portfolios at the end of the month. 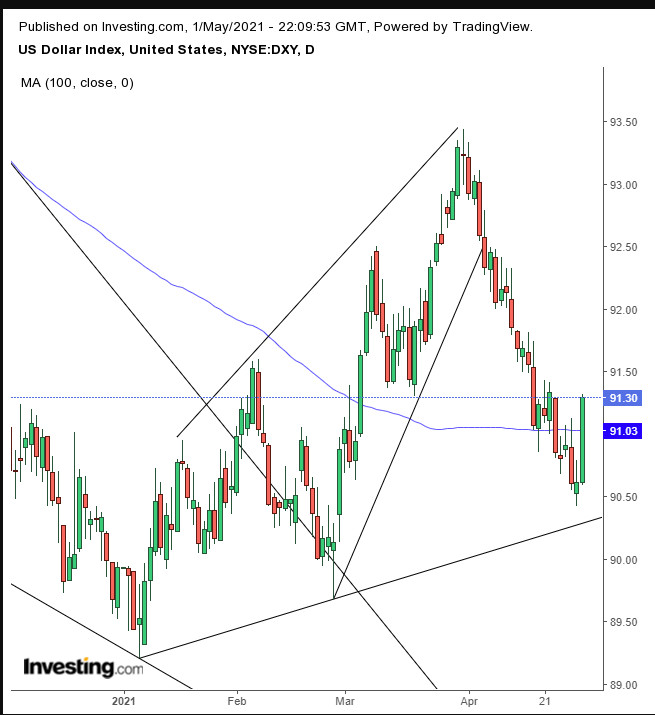 Technically, the dollar rebounded off the uptrend line since the Jan. 6 low. The USD suffered the worst monthly selloff since December after completing a rising wedge. However, we have been waiting to see the price find support by the uptrend line, extending out of a massive falling channel since the 2020 peak, which we have been expecting will drive the dollar to retest the Mar. 31 peak, before it heads back toward the 2020 peak.

slumped for the second day in a mirror image of the dollar’s advance. 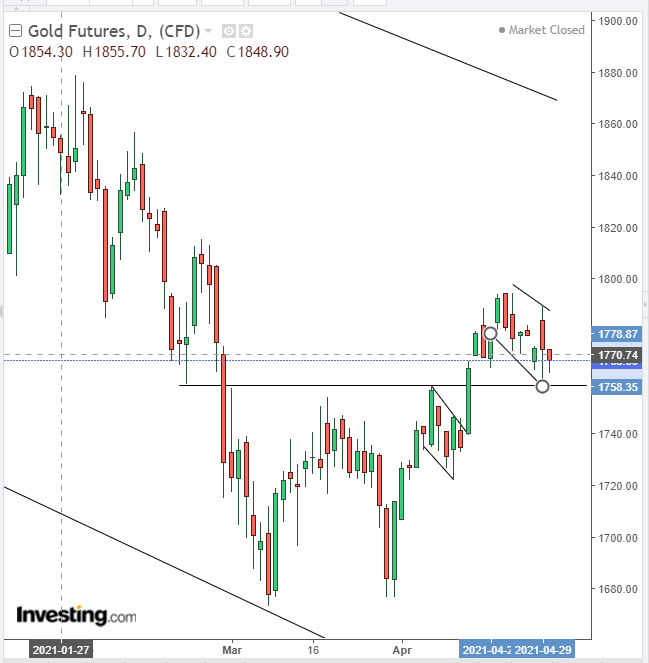 While gold declined on strong US data, it has been developing a falling flag, bullish after the preceding jump, from an earlier bullish flag, that helped the price complete a short-term bottom.

Note, the yellow metal found support by the neckline of the double-bottom, coinciding with the previous low of Feb. 19. An upside breakout would signal a resumption of the upside corrective rally to retest the falling channel’s top.

dipped slightly on Saturday, after closing at the session high on Friday, even after Charlie Munger, Berkshire Hathaway’s (NYSE:) Vice Chairman characterized the cryptocurrency as “disgusting and contrary to the interest of civilization.”  He added:

“I don’t welcome a currency that’s so useful to kidnappers and extortionists and so forth, nor do I like just shuffling out of your extra billions of billions of dollars to somebody who just invented a new financial product out of thin air.”

Meanwhile, scored a new all-time high on Saturday, pushing above $2,900. The number-two digital currency by market cap has quadrupled thus far in 2021, leaping 290%, while Bitcoin “only” doubled. 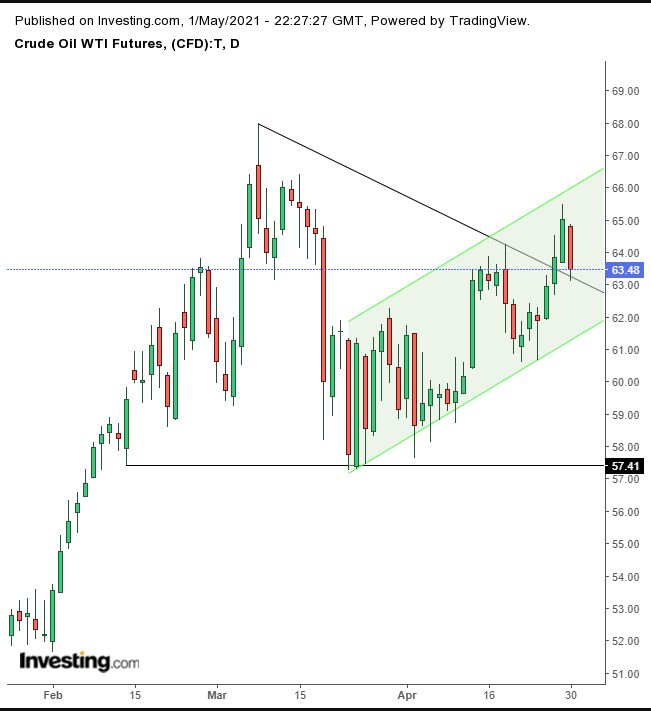 WTI still found support above the ascending triangle that it blew out of on Thursday. The price may have declined upon hitting the rising channel top, but after the bearish pattern failed, it is expected to become a bullish pattern.

All times listed are EDT

Markets will be closed in the UK, Japan and Russia for holidays

Nifty 50 – Keep an Eye on Price Action and Declining Volume

With prices now in the same price range they saw in mid-March, the commodity seems to have...
Continue reading
by THO

# trading range for the day is 74.05-74.45.# USDINR remained in range after RBI announced new...
Continue reading
by THO