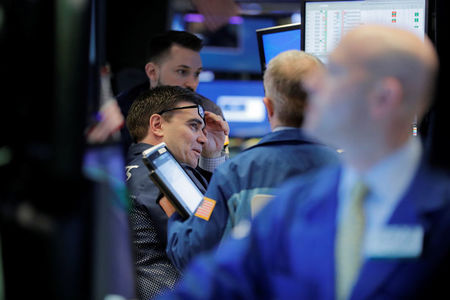 NEW YORK, Dec 22 (Reuters) – The S&P 500 was essentially unchanged on Tuesday as worries over a new variant of COVID-19 and downbeat economic data dampened enthusiasm over the passage of a long-awaited pandemic relief bill in Washington.

The Dow was lower, while Apple Inc helped fuel the tech-heavy Nasdaq’s advance.

“The market trades in anticipation of an event,” said Robert Pavlik, senior portfolio manager at Dakota Wealth in Fairfield, Connecticut. “And once you reach that point as we did yesterday with the passing of the stimulus bill, the market is looking for the next catalyst to drive it forward.”

Apple was an outlier amid a broad sell-off, gaining 3.6% and providing the biggest lift to all three major U.S. stock indexes on news of the company’s plans to roll out an electric passenger vehicle by 2024. Congress passed a pandemic relief package worth $892 billion after months of a partisan tug-of-war, aimed at propping up an economic recovery faltering under the weight of restrictions aimed at containing a coronavirus resurgence. resurgence continues to swell, infecting 214,000 Americans every day, prompting mandatory shutdowns and pushing hospitals to capacity. fast-spreading new variant of the virus discovered in Britain has brought movement in and out of the UK to a halt and sent vaccine makers Pfizer Inc (NYSE:) PFE.N and Moderna Inc scrambling to ensure their drugs were effective against it. of the coronavirus and optimism about an eventual economic recovery made for extreme volatility on Wall Street in 2020, with the S&P 500 logging daily gains or losses of 2% or more over 40 times in the year so far, the most in over a decade.

“The changes that have occurred in the world, I don’t think anyone who’s working today has seen anything like this,” Pavlik added. “Nobody was prepared to deal with this situation where nearly the whole world was shut down.”

Of the 11 major sectors in the S&P 500, only tech and real estate .SPLRCR were green.

Tesla Inc fell 2.4%, extending its slide on its second day as a S&P 500 constituent. Interactive Inc jumped 10.7% as brokers hiked their price targets on the stock on the heels of the company’s announcement that it would buy peer Precor in a deal worth $420 million. Inc slid 2.5% and was among the heaviest drags on the Dow, after disappointing results from a late-stage study of an asthma drug developed in a partnership with British drugmaker AstraZeneca Plc . issues outnumbered advancing ones on the NYSE by a 1.19-to-1 ratio; on Nasdaq, a 1.17-to-1 ratio favored advancers.

Canada shares higher at close of trade; S&P/TSX Composite up 0.31%