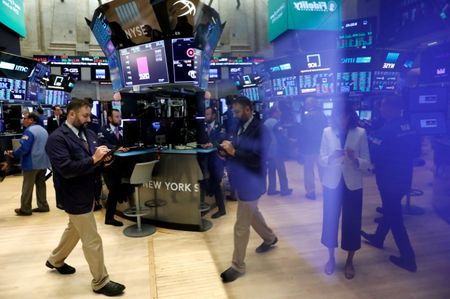 (For a live blog on the U.S. stock market, click LIVE/ or type LIVE/ in a news window.) (Updates to market close)

NEW YORK, Dec 21 (Reuters) – The S&P 500 closed lower on Monday, having clawed its way back from steep losses early in the session as investors juggled the outbreak of an ominous new strain of COVID-19 with the passage of a long-anticipated stimulus package.

The joined the S&P 500 in the red, but financials helped the blue-chip Dow reverse course for a modest gain.

“The ‘Santa rally’ will have to wait,” said David Carter, chief investment officer at Lenox Wealth Advisors in New York. “Troubling news about COVID in the UK has reminded markets that COVID isn’t solved yet; the road ahead may be bumpy and uncertain.”

Congress hammered out a pandemic relief agreement on Sunday after months of partisan wrangling. The $900 billion package, expected to pass on Monday, includes unemployment aid, small business relief, and vaccine distribution, but the dollar amount fell short of what many had hoped for. stimulus plan appears big enough to hold off a recession, but not for long,” Carter added. “But while it’s not as large as many market participants hoped, it does include many meaningful actions that can support markets.”

But the emergence of new, highly infectious strain of COVID-19 in Britain has raised fears of additional shutdowns, and prompted countries around the world to shut their doors to travelers from the United Kingdom. news sent airline stocks sliding, even with the prospect of $15 billion in payroll assistance for commercial carriers included in the stimulus deal. Inc became the most valuable company ever added to the S&P 500 and will account for about 1.69% of the index. The electric car maker’s stock ended the session lower. bucked the trend. The U.S. Federal Reserve released the results of its semiannual stress test late Friday and announced relaxed restrictions on buybacks and dividends. the Dow Jones Industrial Average rose 36.94 points, or 0.12%, to 30,215.99, the S&P 500 lost 14.47 points, or 0.39%, to 3,694.94 and the Nasdaq Composite dropped 13.12 points, or 0.1%, to 12,742.52.