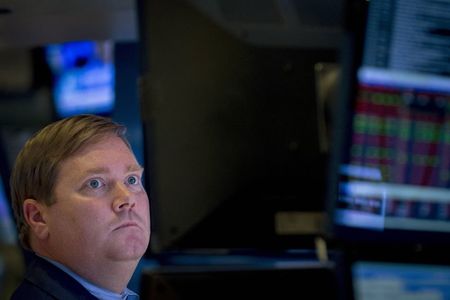 (Updates with close of trading)

By Karen Pierog and Noel Randewich

Dec 14 (Reuters) – The S&P 500 ended lower on Monday after the launch of a COVID-19 vaccine campaign in the United States, while Alexion Pharmaceuticals jumped on a $39 billion buyout offer from AstraZeneca in one of the year’s biggest deals.

Administration of the vaccine developed by Pfizer (NYSE:) PFE.N and its German partner BioNTech began on Monday following emergency-use approval from federal regulators last week. S&P 500 consumer discretionary index was one of the strongest gainers among sector indexes, lifted by a rise in Amazon . The energy index tumbled.

The S&P 500 gave up earlier gains of almost 1%. The index has surged about 13% to record highs in 2020, despite the pandemic, which has wrought economic devastation and killed more than a million people.

“While the entire market is pleased, is optimistic, is bullish about the arrival of the vaccine this morning into the U.S., I think the average investor is realizing that this roll-out, this distribution of the vaccine is not going to be a silver bullet, is not going to go as fast as one hopes,” said Jake Dollarhide, chief executive officer of Longbow Asset Management in Tulsa, Oklahoma.

Alexion Pharmaceuticals Inc was among the top boosts to the S&P 500 and the , surging to a 4-1/2 year high after British drugmaker AstraZeneca said it would buy the U.S. biotech firm. AstraZeneca’s U.S.-listed shares dropped. Disney fell after BMO Capital Markets downgraded the stock. the Dow Jones Industrial Average fell 0.62% to end at 29,859.97 points, while the S&P 500 lost 0.44% to 3,647.33.

Investors were also watching the outlook for additional coronavirus relief after the Senate last week approved a one-week extension of federal funding to avoid a government shutdown and allow more time for negotiations. were also focused on early voting in a pair of U.S. Senate races in Georgia that will determine control of the chamber and heavily influence lawmaking. company Alibaba Group Holding Ltd BABA.N dipped after China warned its internet majors of more anti-trust scrutiny, imposed fines and announced probes into deals involving Alibaba and Tencent Holdings Ltd . maker Tesla Inc rallied as anticipation of its addition to the S&P 500 benchmark next week offset a report of production delays.

Canada shares lower at close of trade; S&P/TSX Composite down 0.92%