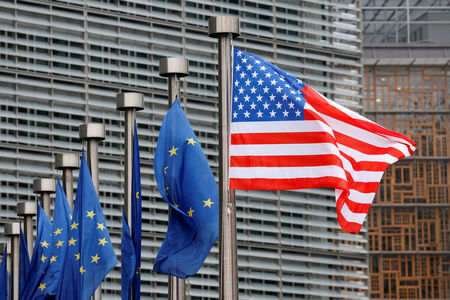 By Susan Mathew and Amal S

Dec 14 (Reuters) – European shares rose on Monday, as a decision to extend trade talks between Britain and the European Union kept hopes of an eventual deal alive, but gains in London’s blue-chips were limited by a higher pound and a 6.2% drop in AstraZeneca.

EU Brexit negotiator Michel Barnier said a new trade pact to govern around $1 trillion in trade, currently free from tariffs and quotas with Britain, was still possible as leaders from both sides decided to extend talks beyond a Sunday deadline. was no new deadline this time, which might suggest some breakthroughs have been made,” said strategists at Deutsche Bank (DE:) (DB) led by Jim Reid.

But as fishing in UK waters and fair competition still remained sticking points, UK Prime Minister Boris Johnson sounded sceptical of a breakthrough less than three weeks ahead of Britain’s exit from the bloc.

Jonathan Bell, chief investment officer at Stanhope Capital, struck a similar chord. “We still don’t know whether there really is a chance to agree or whether this is just both sides proving that they did everything they could to try and reach a deal,” he said.

London’s FTSE 100 shook off initial nervousness from a rising pound to gain 0.1%, led by banks and energy shares. O/R GBP/

Limiting gains was AstraZeneca , set for its worst session in nine months, as investors priced in the British drugmaker’s move to buy U.S. drugmaker Alexion Pharmaceuticals for $39 billion. also stemmed from hopes of a global economic recovery as a top democrat hinted at a possible compromise over a fiscal package in the United States, where inoculation of citizens with a COVID-19 vaccine could begin as soon as Monday. MKTS/GLOB stay-at-home stocks gained after a new lockdown was announced to rein in the spread of COVID-19. Most stores will be closed from Wednesday until at least Jan. 10, Chancellor Angela Merkel said on Sunday, cutting short the busy Christmas shopping season. in online fashion retailer Zalando and food delivery firm Delivery Hero rose 0.9% and 0.3%, respectively. The blue-chip DAX index was up 0.8%.

“In the short term (the lockdown) will be a blow to activity and confidence even if the damage will be limited by knowledge of the imminent vaccine rollout,” DB analysts warned.

BRIEF-Vishnu Chemicals Ltd – Ops At Vizag Plant Have Been Restarted