It’s one thing to slice and dice from a supply-demand perspective. It’s another to zoom in straight on the ‘elephant in the room,’ i.e., how low prices could go before the cold really starts in the United States.

Emerging from the worst weekly selloff in 19 months, which knocked 13% off the market, front-month gas on the New York Mercantile Exchange’s Henry Hub took another drubbing on Wednesday that wiped out most of this week’s recovery.

In overnight trading, ahead of Thursday’s open in New York, the spot contract was tottering again, reaching a session low of $4.80 per mmBtu

Beyond that, fundamental weakness due to a further delay in the cold could even push the market beneath the $4 support—though that might be in the worst of circumstances.

“Prices are likely to remain in the $4.70-$5.40 band,” said Sunil Kumar Dixit, chief technical strategist at skcharting.com. He rationalizes that the bounce-back on Monday through Tuesday could not sustain the interim high of $5.40 and thus caved. “Breaking below $4.70 may expose it to a retest of the 200-month SMA at $4.40,” Dixit said, referring to the Simple Moving Average.

The first is rising production. The trade had anticipated that the supply squeeze which took place mid-year through the third quarter would continue for utilities seeking to burn gas for power generation and heating, as well as exporters wanting to convert the material into LNG. Instead, supply is improving with each passing week with above seasonal injections into storage.

The second is weather, which has hardly been friendly to gas bulls of late. After a brief and intense early chill, the fall season had felt more like late summer at times, with neither heating nor cooling required.

‘Shoulder-seasons’ marking the transition between summer and winter are typically weak times for gas demand as well as prices. This year, though, the expectation was that critically low gas stockpiles would convince the trade to prioritize inventories over weather. That has, however, not happened, given creeping production in recent weeks.

Data released from the EIA in its Drilling Productivity Report earlier this week showed a decline of 222 in the number of Drilled-but-Uncompleted (DUC) wells held in October by producers. The total number of DUCs is just over 5,100 among the seven major US shale basins.

The DUC count has fallen by nearly 4,000 since June 2020 when producers began to turn to record inventory (particularly in the Permian Basin) to bring on oil and gas production more quickly and cheaply, mostly with the goal of staving off natural gas production declines from older wells.

With 2021 average estimates of the time lag between DUC completion to first production at just over two weeks, while permitting and drilling a new well can take 5-6 months, it is no wonder that producers currently favor this avenue. This trend is expected to continue and will buoy recently revived production estimates into the high-demand winter season and add to gas stockpiles. 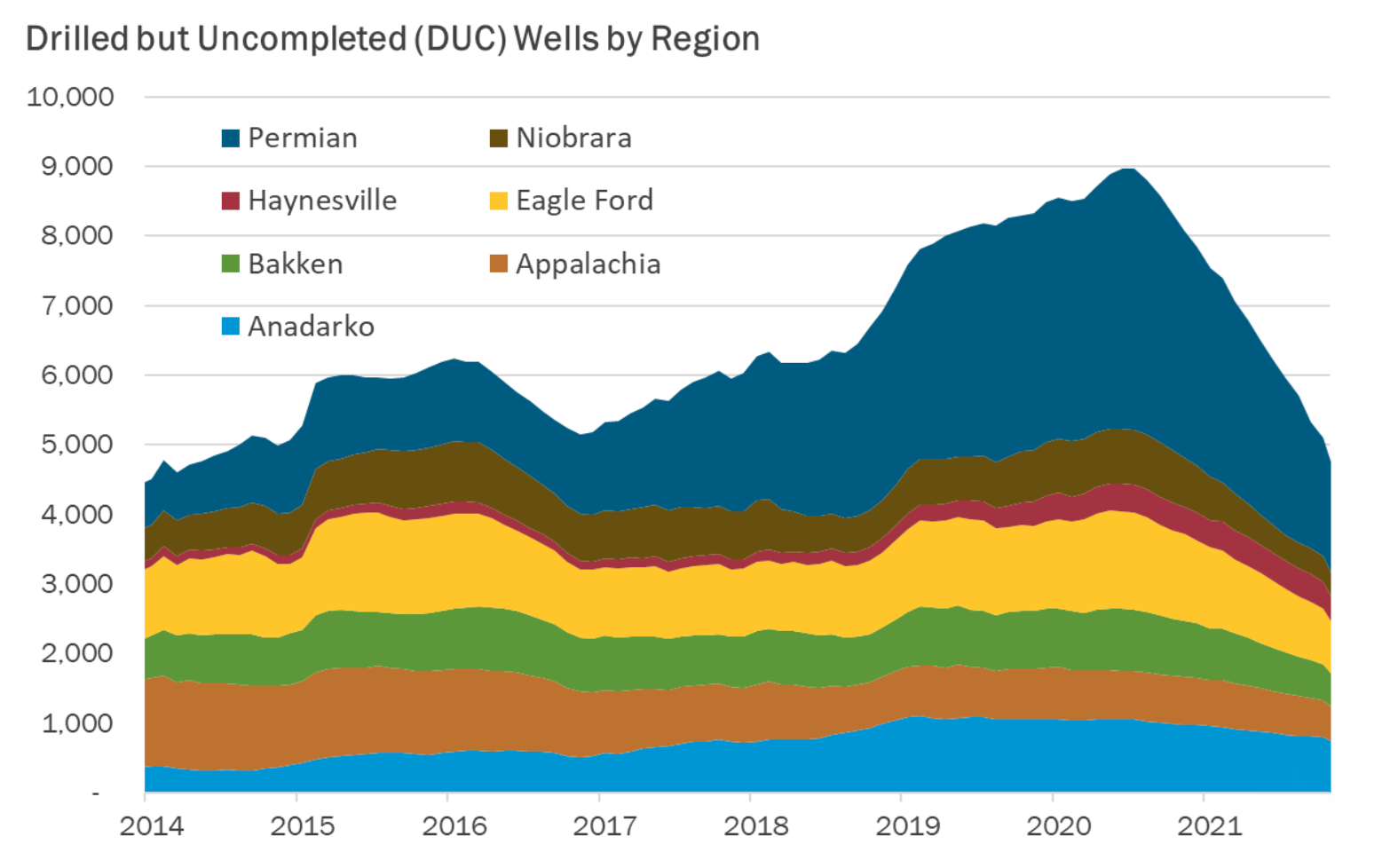 Where Are Gas Stockpiles Now?

According to a consensus of analysts tracked by Reuters and Investing.com, US utilities likely injected 25 billion cubic feet (bcf) into last week as milder-than-normal weather reduced demand for heating. That compared with an injection of 28 bcf during the same week a year ago and a five-year (2016-2020) average withdrawal of 12 bcf.

“Regardless of where the number falls, a storage increase of any kind is bearish at this point in the season,” Myers added. 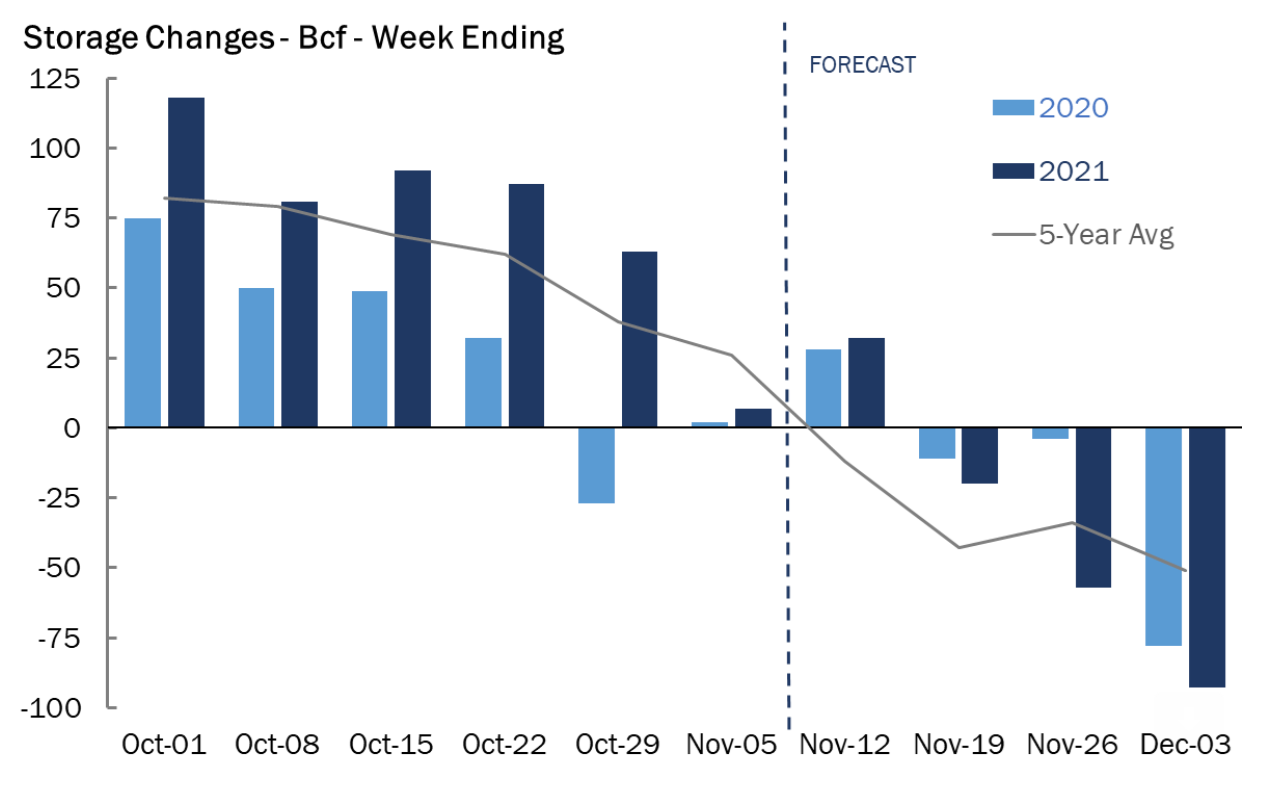 In the prior week ending Nov. 5, utilities injected 7 bcf of gas into storage, which ended an eight week run of utilities stockpiling more gas than usual.

If analysts are right, the injection during the week ended Nov. 12 would take inventories to 3.643 trillion cubic feet, 2.2% below the five-year average and 7.9% below the same week a year ago.

Just two months ago, stockpiles stood at under a trillion cubic feet—some 7.4% below the five-year average and 16.7% below the same week a year ago.

The vast improvement in the gas inventory situation is largely due to benign weather that has limited the need so far for gas-fired heating.

What’s The Weather Like And What’s In The Forecast?

The weather last week was milder than normal with 82 heating degree days, or HDDs, compared with a 30-year average of 105 HDDs for the period.

HDDs, used to estimate demand to heat homes and businesses, measure the number of degrees a day’s average temperature is below 65 degrees Fahrenheit (18 degrees Celsius).

“Current forecasts indicate that the market will be left waiting until stronger cold develops going into Thanksgiving week (11/26) to see its first above-average withdrawal,” Myers wrote in an email circulated on Wednesday to Gelber & Associates’ clients and shared with Investing.com.

Industry portal naturalgasintel.com said analysts were increasingly convinced that following a mild autumn and forecasts for a modest start to winter, the United States is to have ample gas stored underground to meet demand through the peak heating season.

“The gas balance in the US continues to improve as weather forecasts slant towards a milder winter outlook, and storage has reached a healthy level,” Rystad Energy analyst Zongqiang Luo was quoted saying by the portal.

Additionally, the latest domestic weather data on Wednesday provided little for bulls to seize upon, it noted.

Bespoke Weather Services, in a forecast carried by the portal, said its model runs were unable to push the temperature outlook away from a variable, near-normal pattern overall. “Ultimately, a normal pattern is probably bearish for prices at these levels,” the firm said.

All of that noted, sustained winter cold could quickly fuel price increases. With “so much winter ahead of us, we cannot remove the risk premium associated with a colder scenario,” Bespoke said. “As such, it is tougher to guess what price action will do here and now until the pattern can cleanly break one way or the other.”

Production estimates, meanwhile, dipped below 95 bcf on Wednesday and below the seven-day average around 96 bcf. This indicates that, while output is up this fall from lows around 92 bcf over the summer, producers are ramping up cautiously.

At the same time, Luo of Rystad Energy said even before winter arrives, “upward price support remains in the form of resilient gas demand for power and a continued robust outlook for exports.”

Ether Drops Under $4k and Bitcoin to Nearly $56,500 But Mining Remains Immensely Profitable

opened the day a lot weaker at 74.91, registering a fall of 18 paise/USD over its previous...
Continue reading
by THO

Go Fashion Closes 87% High on D-Day; Here’s What Experts Advise Investors to Do

By Malvika Gurung Investing.com -- The parent company of the women's wear brand Go Colors,...
Continue reading
by THO

(Bloomberg) -- Japan’s factory production edged up in October, ending a three-month slide and...
Continue reading
by THO