“Go ahead, pick a number,” seems to be the dare for gas bulls these days.

prices have risen so much that, just three months ago, few could’ve imagined we’d be here. 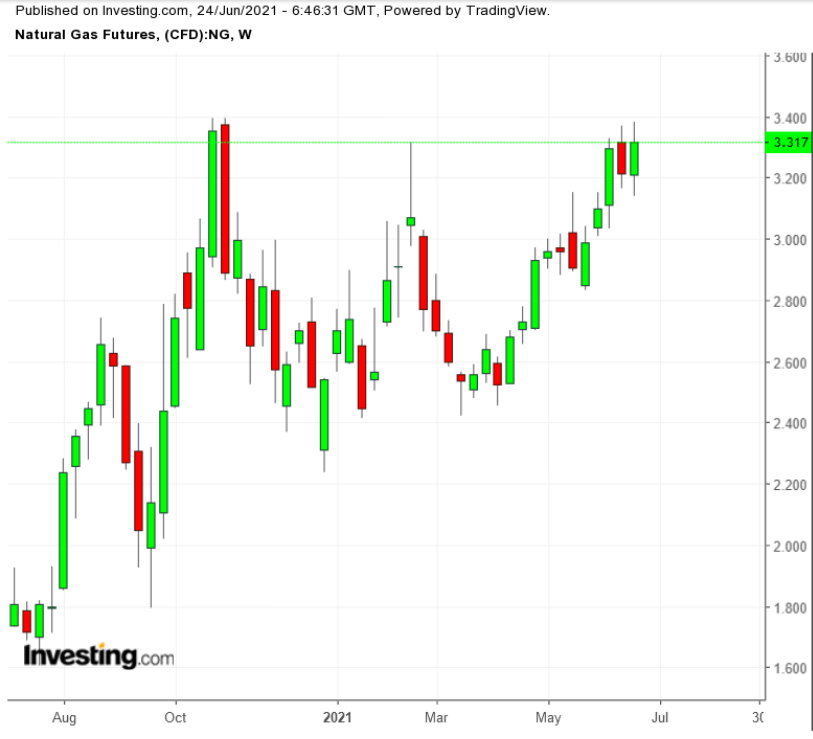 But here’s where we are, just off seven-month highs and within striking distance of $3.50 per mmBtu, or million metric British thermal units. At the March close, the energy commodity was at $2.60.

Of course, this price of gas is nowhere close to the $13 heyday seen in mid-summer 2008, just before the financial crisis that year, when trading gods like John Arnold of Centaurus and Dave Coolidge of Velite ruled the market.

To be sure, there’s no certainty yet if gas futures on the New York Mercantile Exchange’s Henry Hub will continue rising to beyond the $4 and $5 levels, which are already considered super levels in any year.

Gas Futures Could Finish Q2 Up About 30%

Yet, if the current momentum holds—and there’s nothing much, other than cheaper coal, to suggest that it won’t—gas futures on the New York Mercantile Exchange’s Henry Hub could finish this quarter up about 30%, as record heat drives Americans to leave their air-conditioners on most of the time. 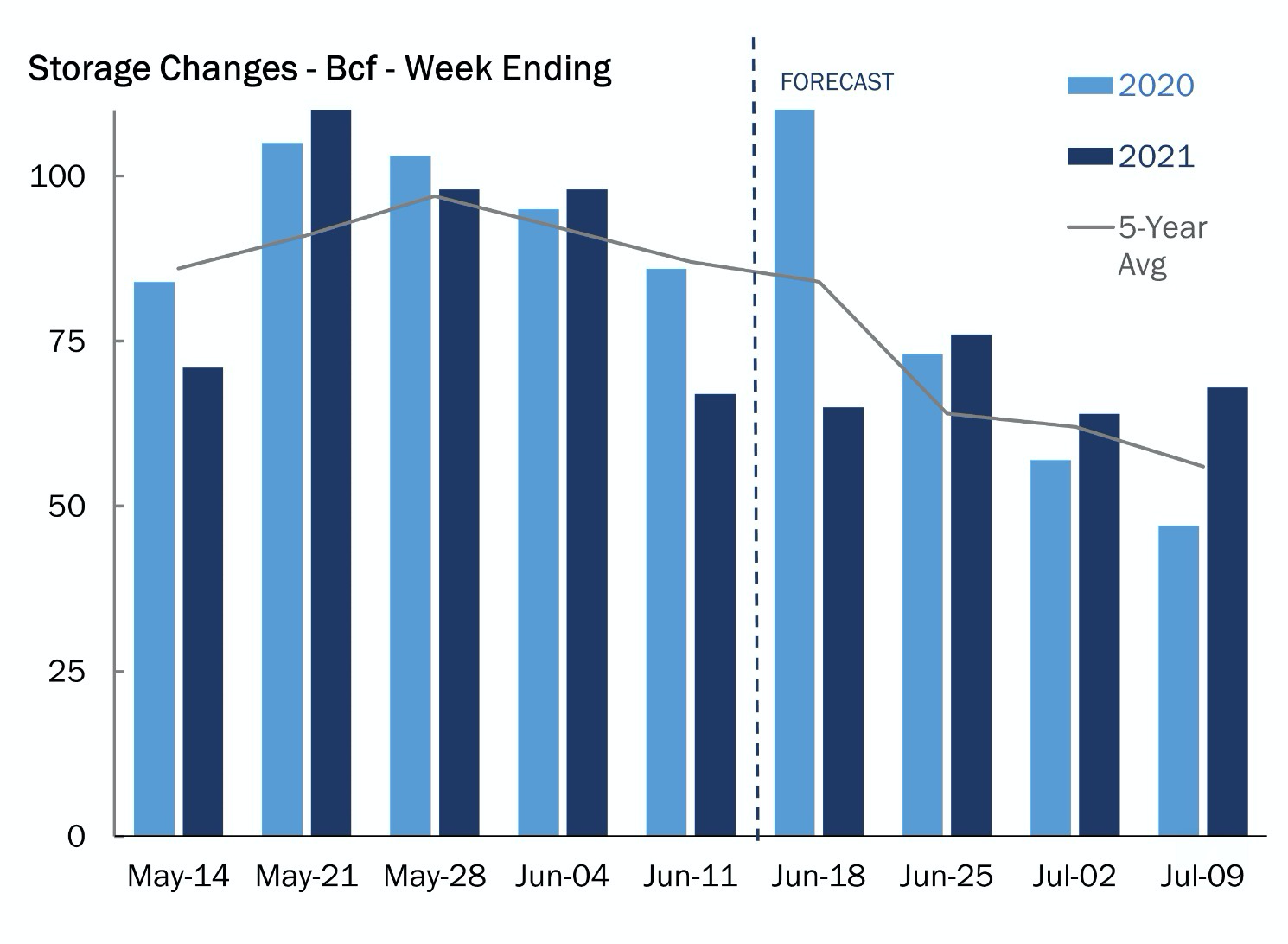 The whopping gain for gas this quarter still pales when compared to the stupendous 45% jump seen during the third quarter of last year. But that was when Henry Hub was starting out from an extremely low base of $1.75 per mmBtu at the end-June 2020, with late summer heat and moderate reopening in ghost cities like New York and Los Angeles helping air-conditioning demand and power consumption.

This quarter, however, started at mid-$2 levels—relatively high for pre-summer gas—and has seen very little volatility since, which is phenomenally rare. Of the 12 weeks since end-March, front-month futures on the Henry Hub have fallen in only three weeks.

Houston-based gas market consultancy Gelber & Associates remarked on the anomaly in a note shared with its clients on Wednesday. Dan Myers, an analyst at the consultancy, said in the note:

“Though the front month has cooled somewhat to $3.35/mmBtu, today’s price spike brought gas to its highest peak in 7 months, eclipsing previous summits from this month’s rally.”

Henry Hub’s run-up came just ahead of the Energy Information Administration’s weekly on natural gas, due at 10:30 AM ET (14:30 GMT) today.

A consensus of analysts tracked by Investing.com are forecasting an injection of 66 bcf, or billion cubic feet, into storage for the week ended June 18, versus the 115-bcf build during the same week a year ago and the five-year (2016-2020) average injection of 83-bcf.

In the previous week to June 4, utilities injected 67 bcf into storage.

If analysts’ gas storage estimates for last week are on target, the injection during the week ended June 18 would take stockpiles up to 2.493 tcf, or trillion cubic feet, some 5.4% below the five-year average and 16.8% below the same week a year ago.

According to a temperature reading by data provider Refinitiv, last week’s conditions were warmer than usual, with 78CDDs, or cooling degree days, versus a 30-year average of 65 CDDs for the period.

CDDs are used to estimate demand to heat homes and businesses, measuring the number of degrees a day’s average temperature is below 65 degrees Fahrenheit (18 degrees Celsius). An extreme heatwave shattered temperature records across the US Southwest last week and pushed power systems to the brink of failure as homes and businesses cranked up air conditioners, Reuters reported.

“This potentially low storage injection is strongly driven by higher-than-average temperatures that swept across the country last week.”

But he added that cheaper coal was beginning to cut into some of natgas’ share in power generation.

LNG Feedgas Demand Highest Since May 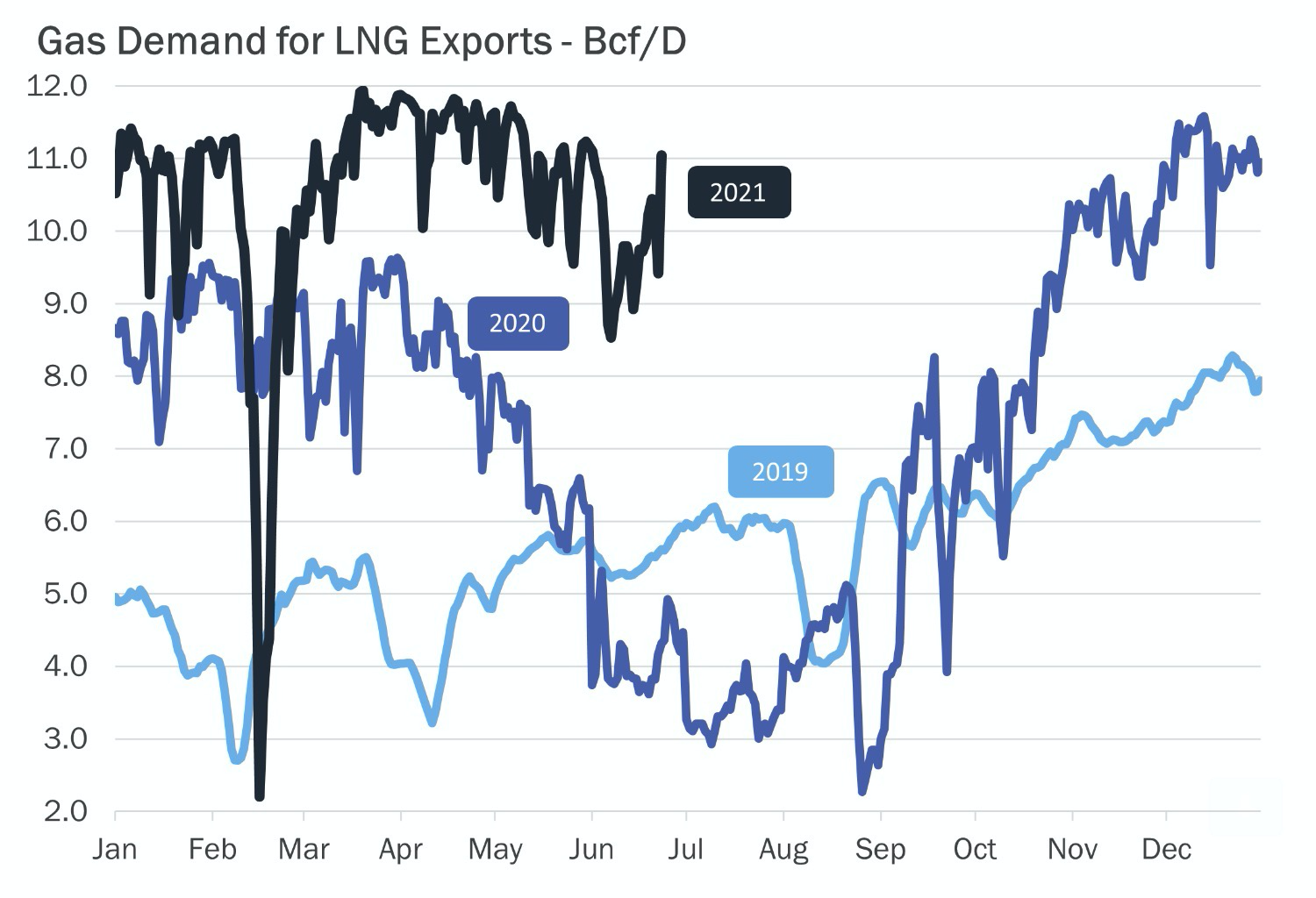 As for LNG, or liquefied natural gas, daily feed flows to export facilities of the supercooled fuel rebounded to 11 bcf per day, he noted.

“It has been nearly a month since feedgas flows were at this level. US LNG exports have been in the 9-10 bcf/d range as a result of springtime maintenance at different export facilities and nearby pipelines since the beginning of May,” Myers added.

Meanwhile, atGasWeather predicted in a blog carried by industry portal naturalgasintel.com that the overall US pattern was set to become hotter for the five- to 15-day period and could have a “bullish lean” for Saturday (June 26) through July 5.

“Sure, the pattern could be more intimidating, but there’s still enough coverage of highs reaching the upper 80s to 100s to result in smaller-than-normal weekly builds the last week of June and the first week of July. And the upper pattern does favor widespread above-normal temperatures holding into the second week of July to keep strong national demand going for the 15- to 20-day period.”

Analysts at Tudor, Pickering, Holt & Co told the same blog that they were keeping a close eye on power generation.

The company had previously forecast around 1.3 bcf/d less power burn through September on modeled sensitivity of a 25-cent increase in price, resulting in 1.0 bcf/d of less demand. Through the start of summer, though, there’s been less elasticity than the modeling suggests.

There could be further upside to their modeled power demand heading into the third quarter, providing “solid support” for pricing, the analysts said, adding:

“Beyond injection season, our modeled undersupply is seen persisting into 2022 and driving upside to strip pricing towards the $3.25/mmBtu level, versus the current curve at $2.93/mmBtu.”