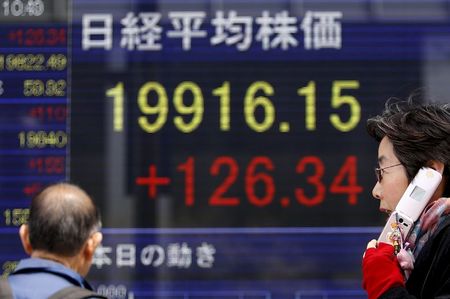 All but six of the 33 sector sub-indexes on the Tokyo exchange ended higher, with highly cyclical shippers and machinery among the top performing sectors on the main bourse.

The market tracked U.S. stock futures higher on growing hopes of a swift global economic recovery amid progress on COVID-19 vaccines, with the first shipments speeding across the United States. Bank of Japan’s tankan survey also supported market sentiment, as the mood among big manufacturers improved for the second straight quarter to minus 10 this month from minus 27 in September. shares pared some early gains in the afternoon, following news that Prime Minister Yoshihide Suga could further restrict a travel subsidy programme to contain mounting infections at coronavirus meeting later in the day. reported a record of more than 3,000 new daily coronavirus infections on Saturday and the capital Tokyo confirmed 621 new cases.

Toyota Motor rose nearly 1.7% to hit its highest level since early February, supported by the launch of its revamped hydrogen fuel cell car as well as by solid November Chinese auto sales data. jumped 3.13% as the Kyoto-based gaming company continued to benefit from tougher social restrictions.

UK Stocks-Factors to watch on Dec. 14