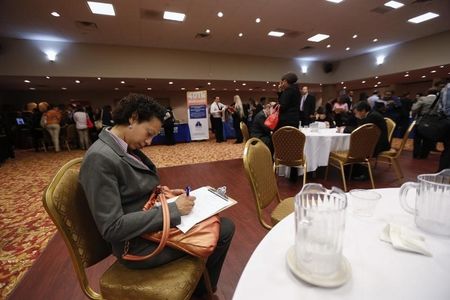 Investing.com — The number of people filing for jobless benefits fell unexpectedly last week, but remained above 800,000 for the third week in a row.

The Labor Department said there were 803,000 initial claims last week, down from 892,000 the week before. The previous week’s numbers were revised up by 7,000 and were the highest since early September.

The number of , which are reported with a one-week lag to initial ones, fell to 5.337 million, from 5.507 million. Economists had expected an increase of some 50,000 ahead of time. Even so, with another 14 million Americans enrolled in two other pandemic-related unemployment benefit programs, the total number of those receiving benefits remained at over 20 million as of December 5th.

The figures reflect sustained pressure on the economy from the most recent wave of the pandemic, which has seen states and cities shut a large part of their economies to stop the spread of Covid-19. Infection curves are now starting to flatten, but the number of people admitted to hospital with the disease remains at a record high of over 117,000.

Other data released Wednesday reflected similar trends: fell by 1.1% in November, more than expected and the biggest drop in four months, as many Americans’ eligibility for enhanced unemployment benefits expired.  At the same time, orders rose by the least in seven months, at only 0.4%. Spending on durable goods, especially electronics and furnishings, has held up relatively well this year as households have diverted spending away from services in response to being locked down or forced to work from home.

The figures are the first to be released Congress approved a $900 billion relief package that aims to provide a safety net for those who have lost their work due to the pandemic and the public health measures imposed in order to contain it. The new bill includes another 11-week extension for enhanced unemployment benefits, as well as direct payments of $600 for those on low and medium incomes, with additional payments for dependents.

The bill, which also includes an extension of the ban on evictions, should help cushion the recent slowdown in the economy,

President Donald Trump late Tuesday demanded changes to the package before he would sign it, arguing for bigger direct checks to households. The bill passed both chambers of Congress with veto-proof majorities.