This week is turning out to be about sideways action after last week’s monstrous rally that saw us breaching the all-time high of $20k to reach a new high of $24,300.

Everyone is waiting for a correction to get the chance to stack even more sats. However, it is to be seen if and when that pullback comes.

In the short-term, Grayscale, an essential indicator of bitcoin’s institutional demand, has closed subscriptions temporarily with big December futures and options expiry coming this Friday while implied volatility gets “very high” along with the futures basis, painting a bearish picture.

Unlike this, the broader market with the UK virus panic and the fiscal package coming is pulling the market in the opposite ‘bullish’ direction.

“Thinking volatile pause in the trend ahead. 25K-19.5K all in play” noted trader and economist Alex Kruger while cautioning to be “careful loading short-term bullets too soon.”

He said that for a sustained move higher, the market needs the leverage and volatility first to come down.

If we recall the $10,000 breakout, last week’s breach through the $20k was much more aggressive. Compared to July’s 25% movement, December’s action was close to 35% from trough to peak from start to finish.

Although it makes sense for bitcoin to give the market the much-expected dip, there’s no knowing if we’ll see one amidst the strong institutional demand.

With whales active on exchanges, there is a dumping risk, for sure, but Ki-Young Ju, the CEO of data provider CryptoQuant, is “not short on BTC since the buying power is so strong now.”

When the Exchange Inflow Mean hits 2 BTC, as it has now, “it is likely to be sideways or bearish. It always has been sideways since November.”

“Even if we see some corrections, it would be sharp and recover very fast,” said Ju.

Meanwhile, Bitcoin is in a real supply and liquidity crisis, which is “extremely bullish” for the world’s largest cryptocurrency.

This crisis can be seen in the accumulation addresses that only received bitcoin but never spent them, which is at 2.7 million BTC — hoarding 14.5% of the circulating supply. In addition to this, at least 3 million, 16% of supply, is forever lost.

Not to mention, out of the 210k BTC mined in the past six months, Grayscale has acquired 185k BTC of it.

While the Exchange Balances Liquidity is vanishing, a mere 12% of BTC supply is liquid, as per Glassnode. The amount of miner unspent supply, which has been increasing since the last halving, is currently holding at 1.7 million BTC.

“I believe we will see this significantly reflected in Bitcoin’s price in the upcoming months.”

The post Here’s What’s in Store for Bitcoin Amidst the Strong Demand & Exhausted Market first appeared on BitcoinExchangeGuide. 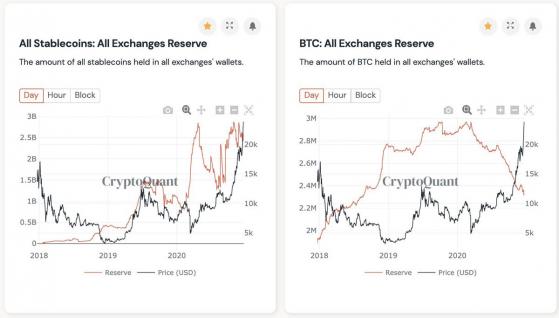