Bitcoin bears are going to get crushed.

Grayscale’s Bitcoin Trust added yet another 12,319 BTC to its product in a single day. This one-day accumulation by GBTC has been more than 11,512 BTC the world’s largest crypto asset manager added in the entire last week that saw BTC breaking above its ATH, $24,300.

This BTC accumulation is about 13x of the Bitcoin’s new supply that is mined as miners are generating 900 BTC per day since the halving in May.

In the past six months, up until this last week, Grayscale added 210,000 BTC to its stash, more than the 185,000 BTC that has been mined during the same period.

This premium is thanks to the SEC’s refusal to approve a Bitcoin ETF. Ryan Selkis of Messari noted, This has,

“led to the exploitation of an esoteric loophole now known throughout the industry as “The Grayscale Trade,” where the asset manager’s investment vehicles serve as manna from crypto fund heaven and ticking time bombs for public markets investors.”“They’ve also led to 5x growth in Grayscale’s AUM this year.”

All the demand from institutional investors and the continued bullish price movement has Grayscale’s assets under management surging to another record of nearly $16 billion.

Selkis sees Grayscale doubling its AUM next year without a price rally. Bringing the price rally into the mix, things could get explosive as “Grayscale does $1 billion in annualized EBITDA at $100k BTC.” 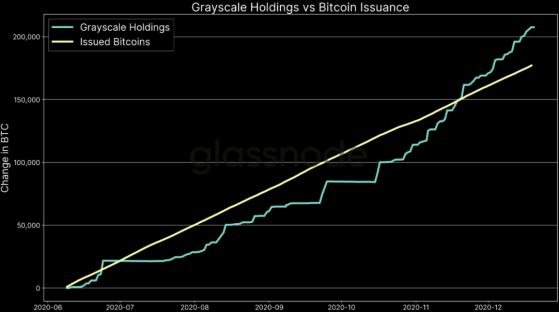