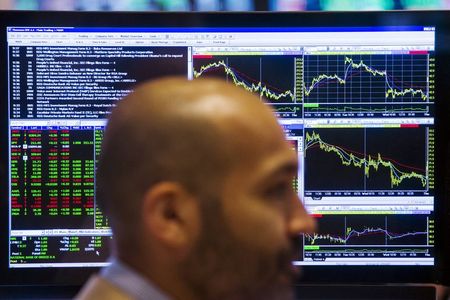 * Pound hit, Brexit talks drag on with no deal

The strain, said to be up to 70% more transmissible than the original, has put some 16 million Britons under tougher lockdowns and prompted several countries to shut their borders to the UK, effectively overshadowing positive U.S. news on a much-needed stimulus bill.

The shutdown of international travel and the flow of freight in and out of Britain threatens chaos for British households and businesses with the lack of a post-Brexit trade deal ahead of the Dec. 31 deadline, it sent the pound 2.5% lower below $1.32 GBP=D3 at one point, though the currency clawed back some of the losses to trade around $1.3285 by 1250 GMT.

Markets broadly edged off earlier lows though most stayed firmly in the red. UK equities were down just over 2%, while UK banks Lloyds and Barclays lost more than 6% at one stage before recovering slightly.

“Our base case, based on what we know, is that we will stay under strict lockdowns for weeks into the New Year,” said Emiel van den Heiligenberg, head of asset allocation at Legal & General Investment Management.

He said the strain had already likely entered Europe, meaning “countries that are not in lockdown will have no choice but to do that quickly and that’s what markets are reacting to.”

The selloffs triggered across-the-board increases in volatility, a measure of price swings on an asset class, taking Wall Street’s “fear gauge” the VIX to the highest since early November .

Futures for the fell 1.8%, recouping some earlier falls, while futures were down 1.2% .

While safe-haven assets such as German and U.S. government bonds rallied, , which usually rises during times of turmoil, fell as much as 1.3% before clawing back some of that loss.

Its weakness on a day of big equity selloffs will rekindle memories of the market slump of March when investors sold assets en masse in a rush for the dollar the positive side, U.S. congressional leaders have finally agreed a roughly $900 billion COVID-19 relief bill. van den Heiligenberg predicted also that vaccine rollouts would limit market downside.

“A correction is justified but a very strong selloff would surprise us…because of the vaccine, by next March-April, we should be able to think about normalisation again,” he added.

The equity selloff sent investors scurrying for the U.S. dollar, pushing the greenback index as high as 90.8, well off last week’s 2-1/2- year low.

U.S. and German bond yields slipped, with 10-year U.S. yields down six basis points . British two-year borrowing costs hit record lows U.S. two-year/10-year Treasury yield curve, another gauge of growth expectations, flattened a touch U2US10=TWEB . It had risen to its steepest level in almost three years on Friday amid optimism about the stimulus bill. turmoil could upend some bullish bets on oil and copper which were expected to benefit from a growth upswing next year.

Brent crude futures dropped 3% while copper fell off the $8000-per-tonne mark it recently scaled for the first time since 2013 CMCU3 .

“The message is clear: oil prices are still very much and will continue to be at the mercy of the pandemic,” said Stephen Brennock of oil broker PVM.