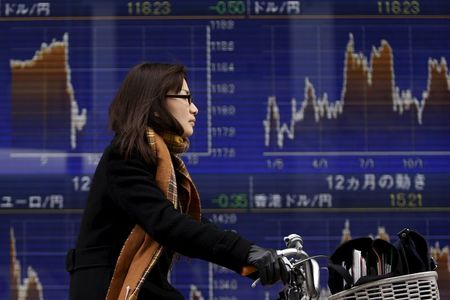 By Anshuman Daga and David Henry

Markets showed little reaction to China’s industrial output, which grew in line with expectations in November, expanding for an eighth straight month as an economic recovery gathered pace. number of coronavirus deaths in the United States crossed 300,000 on Monday as the hardest hit nation started its first vaccine inoculations. uncertainty surrounds the timeline for rollout but key safety milestones could be met by around mid 2021,” economists at Westpac said in a note.

“Meanwhile several jurisdictions continue to struggle with major outbreaks with a particularly notable rise in cases in the U.S.,” they said.

Most Asian markets retreated in early trade, with MSCI’s index of Asia-Pacific shares outside Japan falling 0.4%, having hit a string of record highs last week. E-mini futures for the S&P 500 EScv1 rose 0.1%.

Chinese stocks were down 0.2%.

Markets in Japan and South Korea, both grappling with surging infection numbers and growing public frustration, slipped 0.2% and 0.3%. Hong Kong gave up 0.5%.

On Monday, tighter COVID-19 restrictions were imposed on London as the government citing increased infection rates that may be partly linked to a new variant of the coronavirus. of the vaccines has powered gains in the last few months, with the Asian benchmark up nearly 16% so far this year, sitting just shy of a record struck last week. The rally has been led by markets in South Korea, China and Taiwan.

Last week, the United States authorised the emergency use of its first COVID-19 vaccine, developed by Pfizer (NYSE:) and BioNTech. The vaccine has already been authorised in a handful of countries including Britain and Canada.

“We now know we are building a bridge to somewhere, providing clarity for policymakers, households and companies about getting to a post COVID stage,” strategists at BlackRock (NYSE:) Investment Institute said in a report.

“Yet disappointing jobs data in recent weeks pointed to near term risks as the virus surges around the U.S., potentially slowing the restart,” they said.

The dollar traded near 2-1/2-year lows against major peers as demand for the safest assets flagged. USD/

U.S. Treasury yields were relatively stable ahead of the Federal Reserve’s two-day policy meeting on Tuesday. expectations are growing that the Fed will further ease monetary policy by expanding its bond buying programme, as U.S. lawmakers struggle to agree on a fiscal stimulus package.

The Bank of England and the Bank of Japan also close out their 2020 meetings this week.

Three Factors that Will Drive the Markets on Tuesday