Chart Of The Day: USD/CHF Poised For Big Breakout

There is little doubt which currency has been the king of foreign exchange market this week. The got a big boost after that surprisingly strong print on Wednesday. The greenback hasn’t looked back since as yields have maintained their gains.

While the was already in an established downtrend and the in a strong uptrend, a few other major dollar pairs are yet to trend, but may be about to do so. Among them is the .

The Swiss franc remains historically overvalued, as per the Swiss National Bank’s ongoing and consistent, but ineffective, jawboning. While other major central banks have started to reduce QE and some have lifted rates, the SNB is nowhere near tightening its very loose monetary policy, where the benchmark interest rate is at minus 0.75%. If I am not mistaken, this is the lowest in the world. They charge you money for the privilege of parking your funds in Switzerland.

With the SNB unlikely to alter its monetary policy any time soon, any weakness we may see in the franc will be driven by events outside of the country.  This means that as other central banks slowly withdraw support, and tighten their belts, this would further reduce the appeal of the franc for yield-seeking investors. So, the CHF is likely to weaken against currencies where the central bank is turning hawkish, such as the US and , the and so on.

In the fact, the USD/CHF may be poised for a big bullish breakout, especially in light of the Fed starting its tapering, with the potential to speed up the process if US inflation continues to surprise.

Let’s take a look at the weekly chart first:

On this long-term time frame, the USD/CHF shows a three-bar reversal pattern, with price finding good support this week from the bullish trend line. A potential breakout above the resistance trend line could pave the way for further technical buying.

On the daily time frame, the Swissy has consistently refused to hold below the (rising) 200-day moving average after several futile breakdown attempts this year: 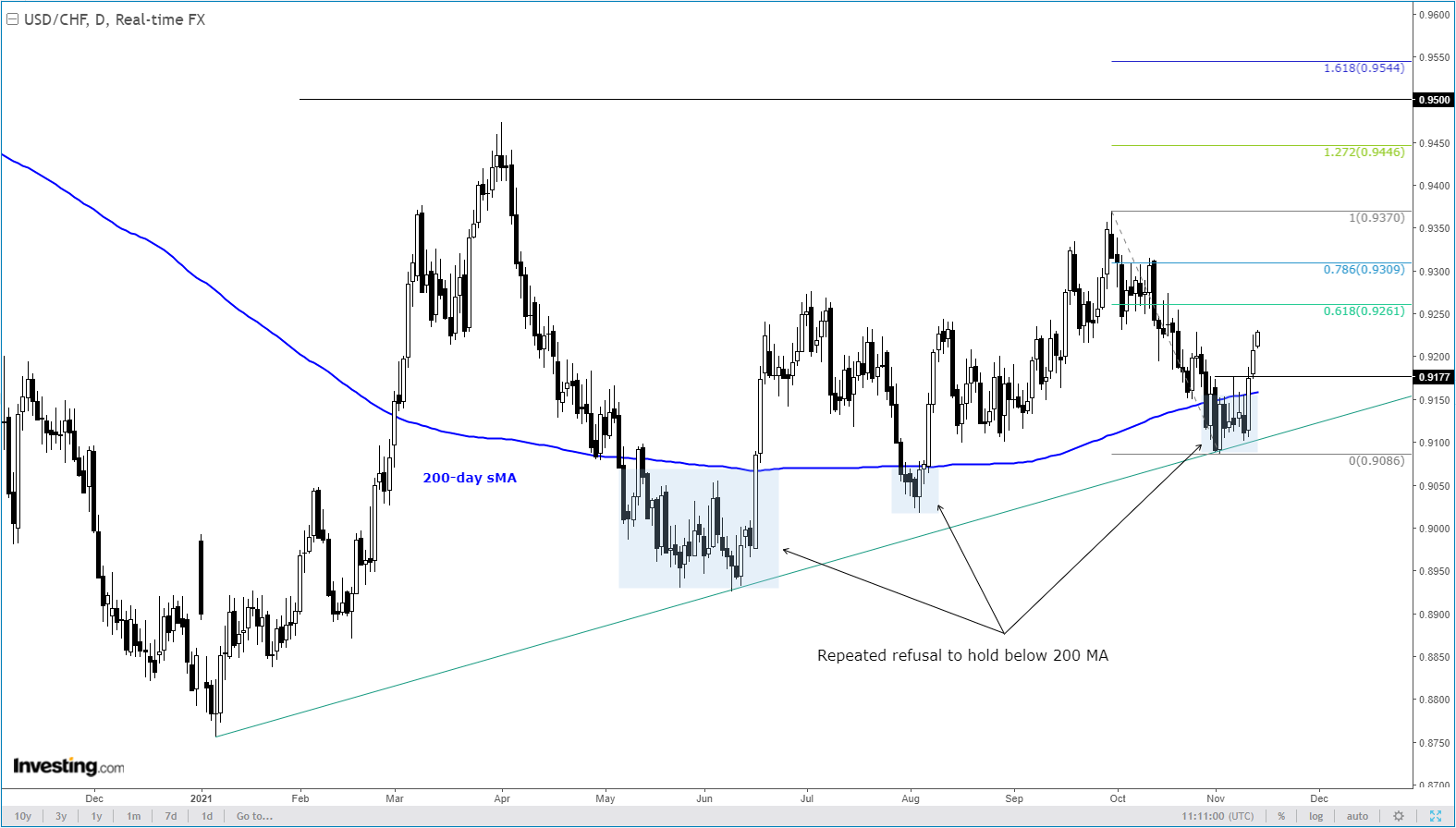 The bears are thus getting trapped. In other words, buying the dip is the strategy that is likely to be favoured among market participants in this pair. Without getting too ahead of ourselves, I reckon we will see 0.9500 in the not-too-distant future, possibly even parity, given the above fundamental considerations and in light of this week’s reversal in the price.

The Stock Market Rally May Crash and Burn

Chart Of The Day: Sunpower Stock Primed For A Surge