Chart Of The Day: NASDAQ Futures On The Cusp Of A Correction

Every market has a story. And every narrative has a good guy and a bad guy, each helping push the plot in a variety of directions.

Until now the equity market story was simple: how soon will lockdowns end? In that tale vaccines were the good guys, beating the bad guy, the global COVID-19 pandemic. But now the story has shifted.

The current story is whether inflation will help or hurt the economy. In that scenario the good guy is reflation—when prices rise because of escalating demand within a growing economy. The bad guy is rapidly rising inflation, which, should it occur, would upend the economic recovery.

Notice that both the good and bad guys operate within a framework where an end to lockdowns and a reopening economy are always a given. Which suggests, of course, that whatever the the pandemic-fueled problems, the narrative takes for granted that the health crisis is nearing an end. (Of course, one would always be wise to stay alert for unpredicatable plot twists, but that’s another story altogether).

Whatever the denouement to any of the scenerios, lockdowns look to be disappearing. When that idea initially surfaced, after vaccines were first introduced, the tech sector suffered, as investors took profit on stocks that were beneficiaries of the stay-at-home environment.

Now that the economic reopening looks even more likely, tech shares, as embodied by futures on the are expected to decline. 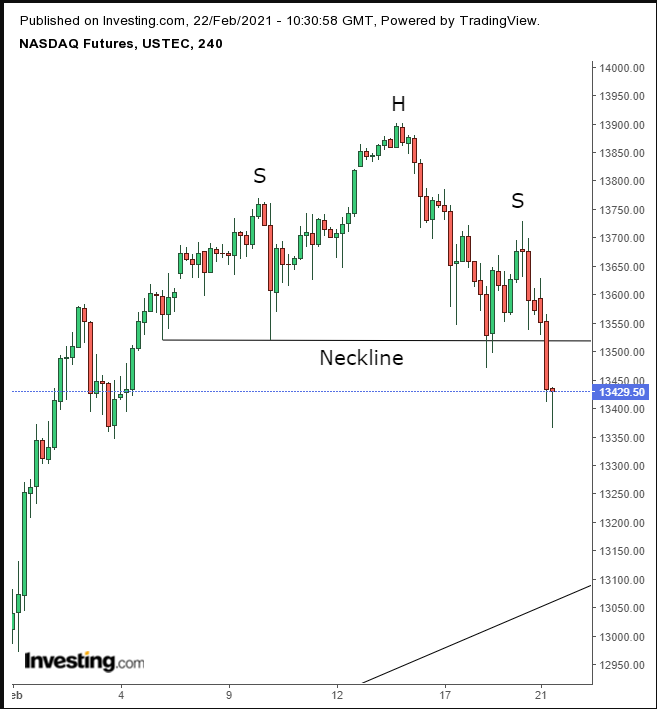 NASDAQ futures completed a H&S top, a pattern that tracks an end to an uptrend and the beginning of a new trend. To clarify, this is on the short-term chart.

The trend on the daily chart remains up, as signaled by the uptrend line below, at 13,100. Therefore, we have no evidence at this point of a major reversal, rather a correction to return to a sustainable advance.

Of course, the support can fail, and the contracts, as well as their underlying assets, can top out.

Conservative traders should avoid this trade, as it goes against the main trend.

Moderate traders would short after the completion of a return-move that successfully retests the pattern’s integrity.

Aggressive traders could short at will, after writing a trade plan that incorporates both risk and reward and which they deem acceptable.

Author’s Note: This is just a sample, which means it isn’t the only truth, even if the analysis is correct. And it may be wrong altogether. Either way, it means that a trade plan is as important, if not moreso, than the actual analysis. It’s imperative to trade with a plan that addresses your personal needs, such as timing, budget and temperament. Take small risks, until you learn how to manage the pitfalls.

Option Picks For the Week

As Commodities Vault Higher, The Meats Will Continue To Climb