The EU has finally lifted its ban on US travellers entering Europe, just ahead of the summer travel season. And after more than a year of lockdowns and restrictions, consumers are beyond eager to once again be on the move and get out of the house.

With such a promising scenario, one would expect airlines and their respective stocks to be huge beneficiaries. However, American Airlines Group (NASDAQ:), the world’s largest carrier by fleet size, number of passengers carried and revenue per passenger mile, may just miss out.

The airline has been forced to cancel about a thousand flights because of staffing shortages, which impact everything from maintenance to in-flight service. This disruption comes at the worst possible time for the carrier, ahead of a summer season that’s anticipated to break records.

The result of all this negative news plays out very clearly via the stock’s supply and demand equation on the technical chart. 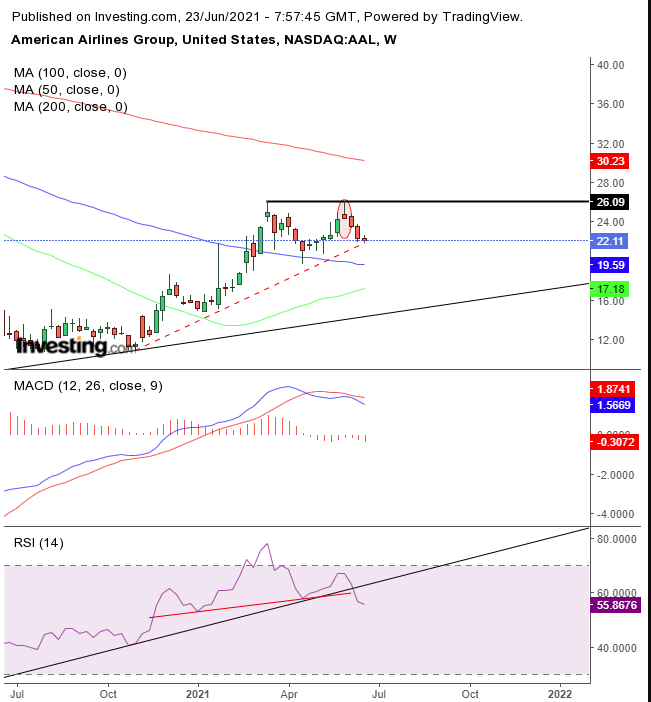 The reversal structure occurred at precisely the Mar. 15 high, as supply doubled down, confirming a resistance at $26. A fall below the 100 weekly MA will complete a double top.

The MACD already completed a H&S. The MACD’s short MA tried climbing back above the long MA, after falling below it, but found resistance, demonstrating a reversal in a broad range of prices.

By taking a step back, it becomes even clearer additional declines could be on the horizon. 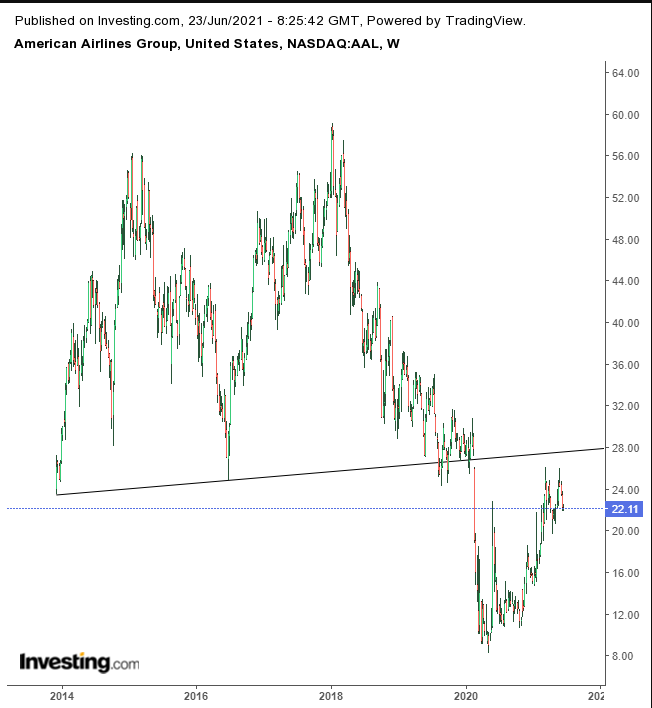 Via the longer view, one can see support turning to resistance. American Airline’s is about to double-top, beneath the trend line that was a support since 2013.

Finally, to understand where supply and demand may be headed, it’s useful to zoom into the Daily Chart 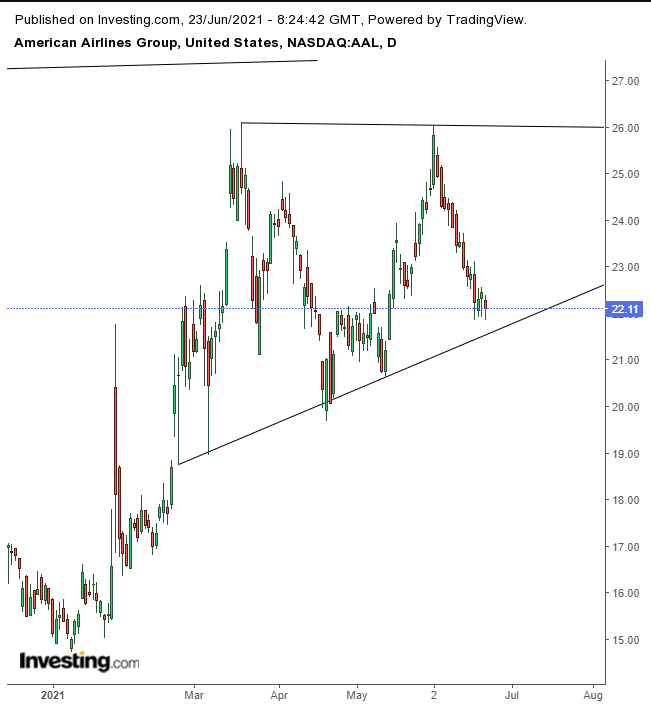 The price is still developing an ascending triangle, a bullish pattern that displays rising demand amid stale supply, which started on the optimism of easing restrictions and a reopening economy, before the recent negative news hit the press.

Nevertheless, on this chart we can see how powerful technicals can be despite weak fundamentals. Apparently, there is sufficient demand to support the price as it enjoyed its first two-day advance since the recent leg down, as it neared the pattern bottom.

Even Tuesday’s down-day trimmed losses, rebounding from the triangle’s bottom. In other words, there are still interested buyers, despite the preponderance of adverse news.

Which makes one wonder, are there some investors who know something we don’t?

Conservative traders should wait for the price to complete the double top before going short.

Moderate traders would wait for the same or for a retest of the $26 levels ahead of taking a short position.

Aggressive traders could enter a contrarian, long position, now, counting on the ascending triangle. If nothing else, the price’s proximity to its bottom affords an exceptional risk-reward ratio. If prices do rise, aggressive traders would short as the price nears the $26 level—switching focus from the short- to the longer-term dynamics, as described above.

Whatever your risk appetite, you must trade according to a plan that addresses all trading aspects, and commit to it. Here’s an example:

Author’s Note: Trading is not a sprint, it’s a marathon. Unless you’re doing insider trading you don’t know what will happen. Ignore results of individual trades and instead measure overall performance. To do that you absolutely must trade with a plan that addresses your budget, temperament and timing. Feel free to use our samples, as a learning tool, with no expectation of profit. Otherwise—and on this we can, in fact, see the future—you will surely lose.