Chart Of The Day: A Brexit Deal Would Put EUR/GBP On Track To 0.85

It’s only taken four-and-a-half years for the European Union and the United Kingdom to come within reach of what some are characterizing as the biggest ‘divorce settlement’ in history. This morning, Reuters said that a deal on Brexit negotiations is all but certain}}. The two sides are now reportedly putting the finishing touches on an outline they can both agree on.

The UK’s pound was said to be declining because of the uncertainty and devastation a no-deal Brexit would have on its economy, in the aftermath of the referendum vote on June 24, 2016. Indeed, sterling plunged that very day, falling 7.5%, its worst slump ever and one of the biggest selloffs for any currency. From that point until Oct. 7, sterling lost as much as 22% of value.

We’re bullish on the prospects for if a Brexit deal is signed, as we noted here. In this post, however, we’ll focus on the {{6|EUR/GBP. 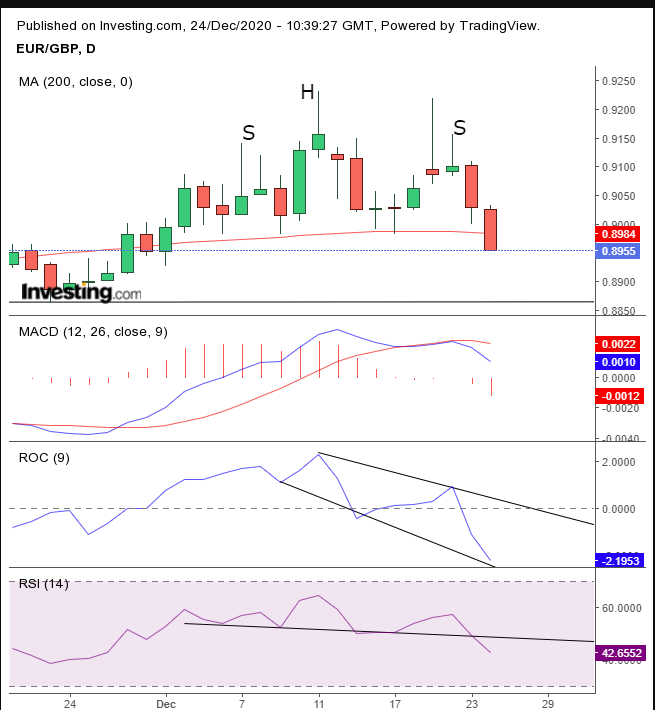 The pair fell for a second day, down 0.8% each time. EUR/GBP crossed below the 200 DMA, which formed an organic neckline to a small, 3-week long H&S pattern. The MACD’s short MA crossed below its long MA, as recent prices weakened.

The Rate of Change (ROC) attested to the price’s most dramatic momentum change since September and posted a falling peak-trough series. The RSI completed its own H&S top, demonstrating that the price pattern was backed by the same momentum.

If this small H&S top plays out according to normal market mechanics, its implied target will complete a much larger and therefore more significant H&S top. 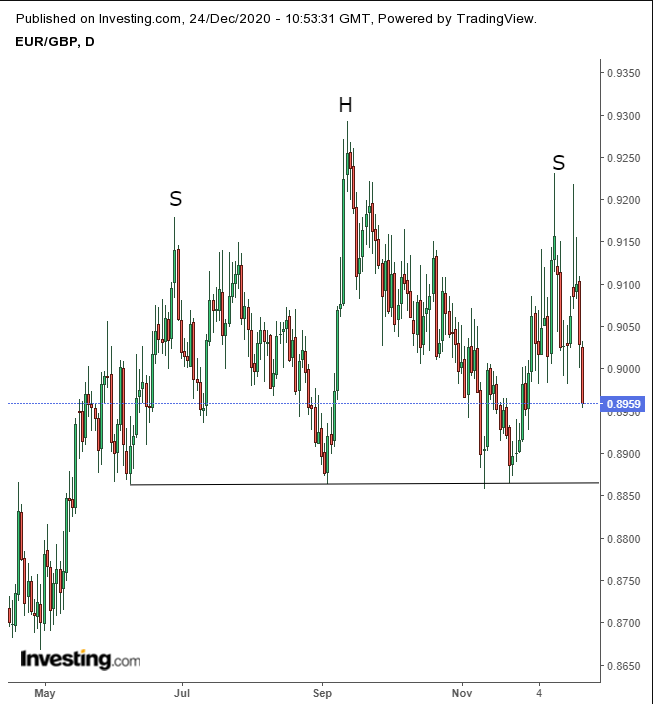 Taking a wider view, you can see that the small H&S top is the right shoulder of a “proper” H&S top that began developing in May. A downside breakout, with the price falling below 0.8850 would put 0.85 in the crosshairs.

Conservative traders should wait for a low below that posted on Apr. 30 at 0.8668.

Moderate traders would wait for the larger H&S top to pan out.

Aggressive traders would jump in now, after having drawn up a trade plan that makes sense for their needs.

Here is an example:

How to Use Market Profile in Forex